The objective of  the culture industries – in a critique developed in the 1930s, written and published in the 1940s by Frankfurt School members Theodor Adorno and Max Horkheimer under the title The Culture Industry – was to keep ordinary folk as docile and manageable as possible… ‘happy’, uncritical, coralled consumers of a ‘capital’ controlled culture.

The idea was: the tranquilized poor, the culturally deceived, the ‘creatively dociled’ buy, watch, listen to and read what they are told to watch, listen to, read. The discourse on culture, being ideologically-fed by capital on steroids, makes phase 2 so easy, the accounts driven bottom-line. This pay-up and now driven discourse leads its proponents still to say –  See! It is what ‘they’ want (the great unwashed unconsidered)  otherwise they wouldn’t buy or want it.

Reminds me of Jack Crabb’s (Dustin Hoffman’s) encounter with General Custer just before the ‘great general’ got whipped at Little Big Horn. “General, you go down there,” Crabb says, when Custer asks him what to do. Thinking Crabb, a pathetic muleskinner, spineless, with not-even guts enough to shoot Custer in the back,  a git who could only lie to him, Custer reasons (aloud, of course) that if Crabb wants Him to go down to the Little Big Horn it’s only because Crabb really doesn’t want Custer to go down there  – Crabb could only lie to achieve a goal. So, Custer does go down there – much to relief of the world, history and the native American.

Little Big Man (1970) was the sort of film American filmmakers made after the film studios lost control in the late 1960s. In that rare moment, spanning a few years only, cultural complexity was synonymous with creativity – the audience and creators were so close they could have been one and the same.

Back to the genealogically disturbed present. No cultural outbreaks, no individual voices, no “surprises” for those in charge right now, no matter how many camp in Wall Street or outside St. Paul’s.  Society, dare I say it, Capital, is under control. No matter what the postmodernists, Foucault, Castells et al want, did and do tell us, culture is still controlled, top down –  never more than in the 21st century (thanks to Lessig {Free Culture, 2004, p12} for reminding us).

So a nod to the voices that seem so still and silent today – to Theodor, Max, Walter and Herbert: We need to hear from you again.

“The web of domination has become the web of Reason itself, and this society is fatally entangled in it.” Herbert Marcuse 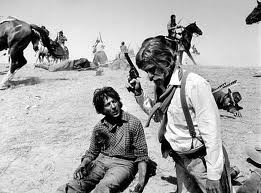